Posted on September 27, 2019 by thelostpenguin

One of the things I miss most after moving to the Highlands, is Japanese food. I had been thoroughly spoiled in the Central Belt always being under an hour away from decent Japanese food.

One of my friends likes to entertain her work colleagues when we’re meeting up for sushi dates, telling them that she’s going for sushi with the friend that introduced her to sushi – and that said friend does not eat fish. Which is funny and also true. I don’t eat fish.

The first time I ate sushi, it was at Yo Sushi on Oxford Street and the friends I went with encouraged me to eat the veggie options and work up to the raw fish. I ate and loved the veggie options and chickened out of the raw fish, but I was determined so I went again when I was back in Glasgow, gave my friend the same advice and savoured all the veggie options while she fell head over heels for the raw fish element. Somewhere along the way I became a vegetarian and she was diagnosed with coeliac disease and sushi became our go to dinner choice because it easily accommodated both our dietary requirements.

I love and miss eating sushi on the regular – the M&S veggie sushi option is better than nothing but all too often a disappointment – and then I realised that I could just, learn to make it myself! I could get the ingredients and the kit fairly easily, learn to roll sushi – I got a book from the library and where that failed youtube came to my rescue – and then make myself cute little bento boxes of sushi for lunch. (Tasty and Instagrammable!)

I started out with sushi balls which are apparently the easiest to make, and while the first few fell apart a bit when eaten, I got the hang of compressing them properly and the later ones in the batch could be safely dipped in soy sauce without collapsing.

My second attempt was in making sushi rolls of the conical variety which seemed a manageable step up in complexity. However this was stymied by the fact that I’d accidentally picked up nori strips rather than sheets so they were too narrow for my purpose. And honestly for most practical purposes as far as I can tell, as they’re about the width you want a maki to be but not long enough to actually hold one together. Perhaps cut into even thinner strips to hold pressed sushi and it’s topping together? I’m not sure you could even make the little sushi boats – whose proper name I’ve forgotten – with them. So the experiment went on hold until I could get hold of some nori sheets.

Once I’d acquired more sensibly sized nori sheets I cooked up another batch of rice – much better consistency this time, and I suspect using actual sushi seasoning rather than making my own from the recipe book helped – and took another run at it. My sushi cones were less than successful, but after some trial and error with the sushi mat I think I’m beginning to get the hang of rolling maki – I have a tendency to over load my nori with rice and not leave room for the filling. But with practice I’m definitely getting better at both general rice handling and also at properly portioning out my rice. My rolls are still chunkier than I’d like but I can now make futomaki that I wouldn’t be ashamed to take to work in my lunchbox even if I’m not quite ready to serve them to anyone else yet!

I may however, need to invest in an actual sushi knife, either that or a whetstone, as apparently I don’t own a single knife sharp enough to be able to cut sushi rolls in an easy or neat fashion! 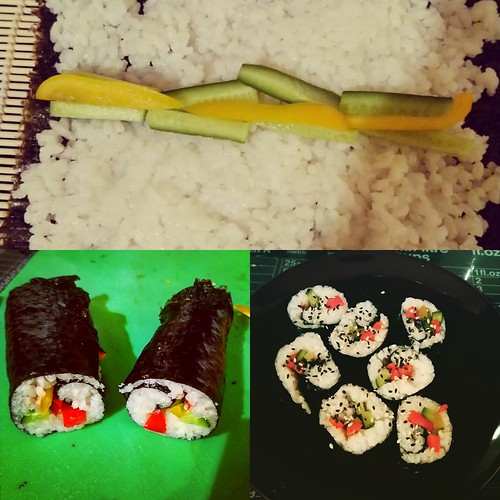 Posted on January 10, 2016 by thelostpenguin

It is helpful, when starting a major or long-term blog challenge on a food blog that you don’t start it just before making major life changes including moving half-way across the country, changing jobs and oh completely changing your diet. In fairness, I only planned to be a vegetarian for three months in 2014 I didn’t realise that I was going to make the shift completely. And certainly in April of 2014 I had no idea that the next year and a half would involve me moving house three times between two cities. That I actually finished the challenge was victory in itself. I ended up making various adjustments to the original list in order to accommodate my new diet, but in the end I made 16 of the recipes that I originally chose and several of those have become regular favourites of mine, including some things that I was previously a little…cautious about making.

So what did I learn about what I think I want to cook and what I actually cook? Well for a start I have a marked preference for things that look like they’ll be really complex but are actually pretty straight-forward. (Soda bread and sausage rolls are good examples of this.) I made a variety of casseroles and tagines over the course of the challenge that seemed like straightforward bulk cooking recipes, but actually had millions of ingredients to very little effect. I also have to be in the right mood to make something complex. Most of the time when I come home from work I want something tasty and straight-forward to cook and eat.

I’d like to think that I now have a more realistic idea of what I’m likely to make, and I’m less likely to hoard recipes and recipe books that I’ll never use. I’ve been braver about trying new things, without being foolish about the likelihood of my actually cooking and eating them.

It’s also a very different prospect bulk cooking for one versus bulk cooking for two or three people. For all that there are now less people to have to come up with something else to feed if something goes wrong, there are also less people to eat up the leftovers if it turns out that what I’ve made it perfectly fine, just not to my own taste. I only have a tiny freezer here so I have to carefully manage my bulk cooking so that I don’t end up scunnered with whatever I’ve made long before I run out of it! I certainly make a lot more soup that I did before I started this challenge. I used to make soup only on special occasions, but now it’s a weekly occurrence in Winter and I have a rotating cast of favourites that I’ve mastered the art of making enough of to get me through the work week.

Overall I found the challenge really useful. I was able to clear out a lot of recipe cards and books that I didn’t actually need and my own little hand-written recipe book has got decidedly fuller. I tried lots of new things and learned a lot of new techniques in the process and it gave me lots to write about here on the blog. I think I’ll do the challenge again in a couple of years when things have settled down again and I need to shake up my ideas on what I cook and what is actually practical to cook in my then-current living situation. 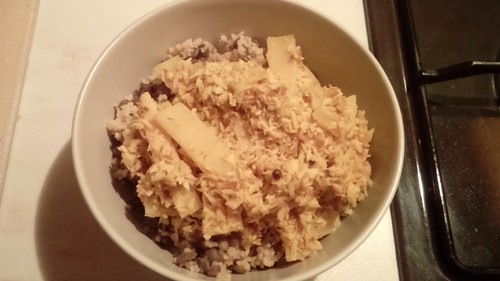 Lastly, here’s my final recipe from this challenge. Kirla Ghassi (bamboo shoots in coconut milk) – tasty curry, served with lentil and couscous from further up the list. Could do with a little more spice and a little more tamarind. (Tamarind and toasted coconut are a delicious combination!)