Posted on December 23, 2019 by thelostpenguin

Apparently I’ve never made a post here about cheese. I must confess that I’m genuinely astounded because I am a little bit of a cheese-fiend. I always had a marked preference for savoury over sweet as a child and a favoured snack for my small self was cubes of cheese with slices of apple. (I spotted a friend of a friend’s toddler happily munching on that very same snack the other day, causing us all to have fond nostalgia for it, so clearly it’s a getting a baby on solids classic.) Throughout my childhood and into adulthood, I accidentally evolved into the kind of person who if they can possibly add cheese to a dish they will. On crackers, on toast, to thicken a sauce or even in soup. I love cheese. I often joke to people who, on discovering I’m a vegetarian, feel the need to check if I’m a vegan, that I couldn’t possibly give up cheese – ‘giving up meat was easy, giving up cheese, now that would be difficult’. And frankly given how often the only veggie option on offer is macaroni cheese, I’m genuinely glad I like cheese.

For reasons that don’t need explored at this juncture – it was a gift – I happen to own a set of four cheese knives, along with what I think of as a bog-standard cheese knife. (It’s quite old, I think it previously belonged to my parents, I had it as a student due to the aforementioned cheese-fiend status.) I’ve always been a bit baffled as to why there needed to be so many options – surely either cheese is soft enough that you can take a butter knife to it, or hard enough that it needs a specialist cheese knife. It appears I was wrong. Over the last few years I’ve gained a fondness for cheese from the Damn Fine Cheese company – they’re based in Dumfries & Galloway so they’ve become a seasonal treat for me – which is edam-style cheese in a variety of flavours. Theirs is definitely cheese that needs a cheese knife – in fact it was their cheese that made me get my cheese knives out of storage and caused me to bemoan my then landlady’s lack of a cheese knife, in what a dear friend of mine called: ‘the most middle-class thing I’ve ever heard you say’ – though I’ve occasionally had a bit of a fight cutting their cheese although I blamed that on my cheese knife being quite small. For some reason while cutting cheese for crackers the other day I got frustrated with the cheese adhering to the knife and grabbed one of the other options from the box. This was an utter dream, lovely thin slices peeled off the block, ready to apply to crackers.

Clearly I’ve been using the wrong cheese knife. There was only one thing for it; I needed to do some cheese knife research. What else have I been missing out on? Have I needlessly struggled with other cheese when I unknowingly had a tool in the drawer that would have simplified my life? Or could I actually pare down my collection.

Apparently the kind I think of as the ‘bog-standard’ is called a Fork Tipped Spear, good for firm cheeses and serving cheese in general. The one I’d bemoaned the smallness of is a Small Spear, also a hard cheese knife. The knife that came to my rescue was a Flat Cheese Knife which is better for softer cheeses so that fits too. But what about the other cheese knives in my box set? What should I be using them for?

Well for a start one of them isn’t actually a knife it’s a cheese fork, for serving or using like a Carving Fork to spear your older harder cheese in place while you saw chunks off. Realistically for me, it’s strength would be if I’m serving friends a cheese board over the holidays, pairing with the small spear to assist with serving. But the other one, curved like a scimitar with holes in the blade; what’s its game? Well it’s for soft sticky cheese – the camembert, cambozola and castello of the world – which I must confess I tend to only cook with, rather than put on crackers, so I tend to buy in the weight I need for the recipe and then pull apart as necessitated by the recipe. I can see the logic of that knife, even if I personally have no need for it.

I guess there’s nothing for it, there’s no point having this selection of cheese knives and never putting them to use, I need to organise a cheese and wine night for my friends!

Posted on November 22, 2017 by thelostpenguin

It wouldn’t be nanoblomo on this blog, if I didn’t squeeze in a wee entry on hot beverages. Last year, when the annual, parental cry of Christmas present hits went up, I dredged up the idea that I’d like a milk steamer. I’d gotten slightly obsessed with coffee lattes – the only kind of coffee I actually enjoy – over the last few years and had recently discovered the odd sub category of tea lattes, especially the ones that shouldn’t really work. (I know from unfortunate experience that milk in green tea is vile, so why on Earth is a matcha latte so darn good?) Being able to make my own seemed a good way to save myself both time and money of a morning. I got myself a little insulated mug – its got owls on, its very cute – picked out a little milk frother – try to find a non industrial milk steamer outside of a coffee machine proved to be an exercise in banging my head off a wall – and bookmarked a whole bunch of recipes for my favourite odd tea lattes and planned to beat the January blues with them.

Of course, life happened in January and I didn’t have a commute to need to make lattes for, so my careful plans fell by the wayside. Other than a couple of uninspiring attempts at better hot chocolate my milk frother has been gathering dust in my cupboard. However, November has arrived, with driving rain and gloomy grey skies, and in the aftermath of a grinding cold, my commute has been in dire need of a cheer up. So I decided to break out the milk frother and bring myself some much need seasonal cheer.

A while ago, I came across a tub of the instant matcha sachets – on one of those, end of line shelves in the supermarket – and made grand plans to have a go at making my own matcha lattes. (They can be rather hit or miss, either divine or a little…dusty, depending on which barista you get in the coffee shop.) I had delightful plans for comparing and contrasting between those made with the ground matcha and different kinds of green tea bags. Would a Tokyo Fog turn out to be more my thing? What would you call the same thing made with Jasmine tea? (A Beijing Fog? Given the air pollution issues in that city that doesn’t sound entirely appetising.) Yet, once again, I didn’t get around to actually doing anything about my exciting plans until gloomy mid-winter came to call. I’ve been glorying in a seasonal special at my favourite tea shop called a Matcha Maker, which is essentially a white hot chocolate matcha mash-up. It’s utterly heavenly, so once I master the straight forward matcha latte, I need to perfect that one. Though first I’ll have to figure just how they make it!

This week I have, for reasons that don’t need explored at this juncture, been working on perfecting my London Fog. I’m not entirely sure what it is about a well-made London Fog, but there’s something deeply comforting about drinking it. Somehow it brings out the best of the Earl Grey, that deep aromatic flavour and almost floral scent. I suppose in certain ways its my ideal form of tea drinking. My preference when it comes to standard tea is strong with lots of milk (several of my colleagues just leave the bag in for me when they make my tea – as does the lass in my favoured tea shop when she makes me a London Fog) and when you make a London Fog you make the Earl Grey into a highly concentrated brew which you then top up with a decent serving of hot frothy milk. It’s hot, soothing, flavoursome and just a little sweet. Perfection.

One of the unexpected aspects of sharing a flat with someone else who is as enthusiastic about cooking as I am is that we set each other off. (There are almost always home-baked goods of some description in the flat – brownies, muffins, cookies – our other flatmate is loving it…and has co-incidentally taken up running) My flatmate decided to try home brewing, which inspired me to buy a yoghurt maker. I was making yoghurt on Wednesday morning before work, and when I came home my flatmate told me he’d been inspired to buy a steamer. I don’t know what I’ll do when the steamer arrives but I suspect making jam might happen.

Anyway, I bought a yoghurt maker. It’s not actually my first encounter with a yoghurt-maker, my mum had one when I was little, and I have fond memories of helping her make yoghurt. This is very different from my memory of that. It’s considerably bigger for a start, and while her yoghurt maker involved four little tubs mine has one giant jar. I didn’t buy it because I thought it would save me money – it was all about the fun element – but given the sheer amount of yoghurt I get out of it, I think it might eventually break even. 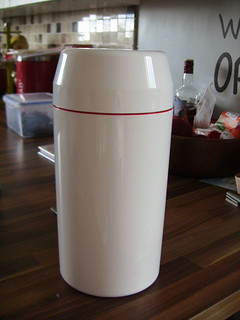 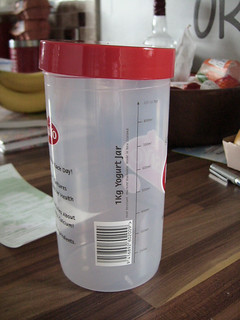 The other major difference is that with her version you kept a little yoghurt back to use as starter for next time but the ‘starter’ you get for this one is essentially powder. 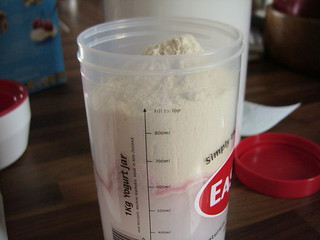 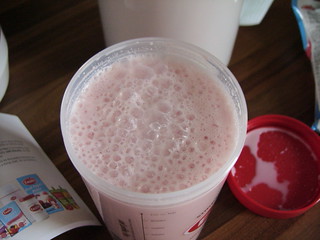 Anyway, it’s a ridiculously straight-forward process (I was expecting far more mess) where you half-fill the inner cylinder with cool water, add the starter mix, put the lid on and give it a good shake, top it up with more water and give it a further shake. Resulting, in this case, in something that looked convincingly like frothy strawberry milk. 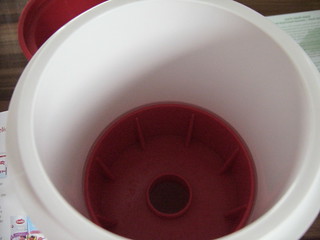 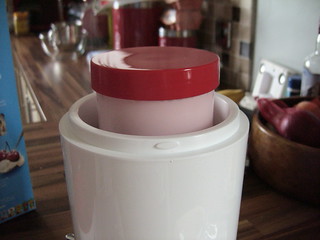 Then you fill the big cylinder with water up to the top of the baffle (that’s the red thing) and slot the inner cylinder inside it, close the lid and leave to set for 8-12 hours, after which you take it out and keep it in the fridge like normal yoghurt.

I had my first try this morning with some blueberries – a tasty success!