Posted on October 15, 2018 by thelostpenguin

After last year’s success with herbs, this year I decided to try my hand at growing some vegetables. I kept things simple by only trying two things – I figured that growing vegetables from seed was adventurous enough for one year – and picking varieties that were supposedly good for container growing.

I had high hopes for my spinach – cut and come-again variety – which got off to an early and promising start. Unfortunately it proved to be disappointingly insipid in flavour, and I never quite master the cut and come-again aspect of the process. 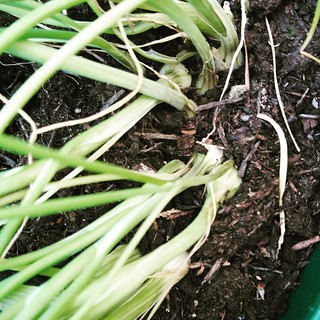 My spring onions on the other hand were an unmitigated success. They got off to a slow start, as it wasn’t until mid-July that I had any worth picking, but once they got going, I had a veritable glut of them. My favourite part of growing spring-onions is that you can leave them in the ground and just pull them as you need them. So I could just pick two or three as I needed them. Also I’d under-estimated the germination rate of the seeds thus had planted them too densely. So once I had made first few croppings (picking the biggest ones, that had pushed their bulbs out of the soil, as per the internet’s collective wisdom) I found that the remaining bulbs spread out into the new space and bulked up in turn. Oh and the flavour of those more mature plants was something else, as a friend of mine put it, less of a strong onion flavour and more of green flavour. The polar opposite of my bland and insipid spinach. I’ve never been much of one for raw spring onions, but I found myself garnishing all sorts of things with these piquant little fellows. I’m not sure how I’m supposed to go back to their bland supermarket compatriots over the winter… 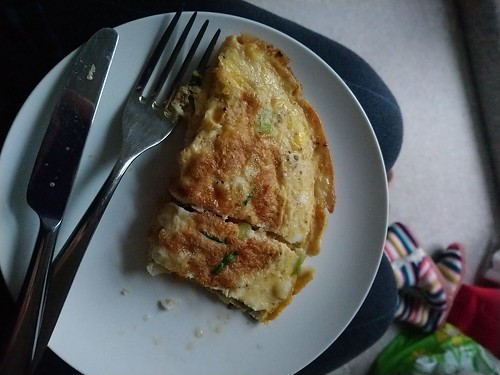 My herbs have been rather less successful this year. After thinking that my mint had died a death in a late snow, I was delighted to find that it made a stellar recovery, only for my rosemary to wither and die for no obvious reason. (More experienced gardeners suggested it had wet feet, but as it was in exactly the same level of drainage as it had thrived in the previous year, I have my doubts.) Also while my parsley is still struggling away, struggling is definitely the word, as it has remained pretty much the same size since I cut it back after it’s attempts to take over the world last year. Though the purple sage has definitely benefited from the parsley’s downfall, as I’ve had far more sage than I could possibly eat.

I decided to try a different herb preservation technique this year, I was brave and attempted to dry my herbs in the oven. The version that worked for me, was to lay out all my herbs on an oven tray while my dinner was cooking in the oven, and put them in the very bottom of the oven once it was switched off (but still warm) shut the door and leave them to toast gently while I ate dinner and washed the dishes. So far I’m quite happy with the results, and the little grinder that I bought for the purpose is now full of ‘mixed garden herbs’ (mint, thyme, sage and a few left over bay leaves). 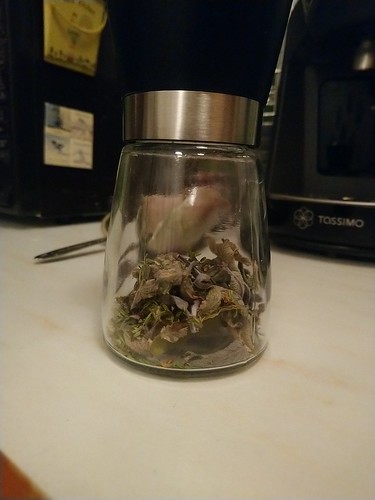