Cooking the Book – Being a More Adventurous Cook

Posted on November 3, 2017 by thelostpenguin

I must confess, the only reason I have anything to write about for this post, is because I wrote the last post. It wasn’t until I was posting it that it dawned on me that I hadn’t actually cooked anything new from my book last month. Which caused me to squash in some extra cooking at the last minute.

However, what it did also do was make me cook something on a day might not otherwise have cooked at all, or eaten remotely well. Instead I ate something delicious and deeply satisfying, like a hug in food form that would keep me going for several days afterwards.

This month’s recipe was a little bit of an adventure. It started with some broccoli. My housemate went away to visit their cousin and left me a note asking me to use up their broccoli. So when I broke open the recipe book, I knew that it needed to involve broccoli in some capacity.

I came across Sesame Beef and Broccoli with a Honey Soy Sauce and that was my original intent, but as I looked further into it and its practicalities and realised it wouldn’t work with the protein I had on hand. (Although the illustrative photo show small lumps of meat that I could easily substitute with the packet of seasoned tofu I had in the fridge, it turned out that you needed a steak, which would be coated in sesame seeds and only later chopped up.

What I ended up making was a combination of that recipe and the recipe for Chicken and Cashew nut Stir-fry with Hoisin Sauce and Five-Spice Rice. I swapped the Chicken out for the tofu pieces – good texture, didn’t fall apart the way most other tofu I’ve tried does – and not having three different colours of peppers or any spring onions on hand, traded those for mushrooms, one kind of pepper, some baby sweetcorn and the all-important broccoli. Handily, par-boiling the broccoli and sweetcorn gave me a vegetable stock to make the sauce with so I felt brave enough to tackle making my own stir-fry sauce. Disappointingly the recipe suggested a bottled hoisin sauce, or using corn flour and soy sauce instead. So I took that idea and combined it with what remains my favourite Chinese sauce that I can actually make myself. It’s a combination of soy sauce, limejuice, rice wine vinegar and mirin. (It should really have brown sugar too, but I don’t think it would have worked cooking the sauce the way I did, in the middle of the stir-fry.) It’s a firm favourite of mine and it did not disappoint here.

I’ve tried making five-spice rice before with little success, where some spices can be thrown into the cooking liquid and give a delicate flavour to the rice, I’d always found five-spice rice to be strangely bland using this technique. However all was revealed to me, if you toast the spice mix first then stir the rice into the toasted spice to coat it and then add the water, you get a much tastier more flavoursome result. 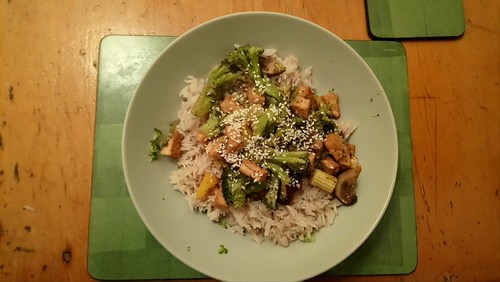 In a call back to my original choice of recipe I swapped the cashew nuts for sesame seeds for scattering duty. Something that I used to do all the time, but rarely do these days.

So really I was more using the recipes as a set of guidelines for techniques I wanted to try, rather than a set of strict instructions. However, I feel that given that the recipe is literally called ‘how to be a better cook’ I think Lorraine would probably approve of that methodology.