Posted on March 1, 2017 by thelostpenguin

So, the news has broken, that ideally we should be trying to have ten portions of fruit and vegetables each day instead of the previously recommended five. Now, even as a vegetarian who comfortably gets their five a day most days, I thought, that’s a bit steep. Yet I remember as a kid, discussing with my mum the whole 5 a day thing and her telling me that actually it was meant to be much higher – 7 or 8 portions – than that but they picked five because they thought that was a reasonable amount that wouldn’t cause people to revolt. And really, at 80g a ‘portion’ that’s not all that much once you’ve weighed some actual fruit.

So I decided to do a fun project over the first ten days of this month to see how easy it was/how much I needed to change my diet in order to get my 10 portions a day. I should add, that I made this decision at about six this evening, while waiting for the oven to heat up and contemplating how much baby sweet corn I would need to have with my dinner to count as a portion, so I’m starting from a reasonably neutral position of a normal workday. Also that I didn’t weigh my portions until dinner so I’m making rough guesses on those.

I was actually surprised by how few portions I ate today. In the process of researching how much an official portion is I made some frustrating discoveries. The guidelines encourage diversity in your fruit/veg consumption, so multiple portions of the same thing don’t count. Potatoes aren’t a vegetable! (Though sweet potatoes are…) Kiwi fruit are only half a portion each – I don’t think I’ve ever eaten more than one kiwi in a sitting; one is the perfect size to tuck in your lunchbox or to chop on your cereal. Which all meant that the big bottle of homemade smoothie I took to work with me today – I’m recovering from the cold so I’ve been making a lot of smoothies lately – with its two kiwi fruit and three pears – only counts as two portions. Thank goodness for my kale and blue cheese soup at lunch, I’ve no idea how to count a liquid but I reckon between the giant leek, three sticks of celery and half a bag of kale, there has to be at least 2 portions per serving.

I was also surprised how much baby sweet corn I did need to make up the portion. I’d picked up a packet of reduced baby sweet corn and mange tout on my way home and ended up using half of each to make up my 80g portion. (Apparently what those packets contain is essentially a portion of each veg.) However, when I actually came to eat my veggies, there did seem to be an excess of them, so clearly I’ve just been skimping on them in the past!

All in all though, today’s eating was pretty average and I still managed seven portions of fruit and veg over the course of the day. It’ll be interesting to see how much better or worse I do once I start thinking about them properly. 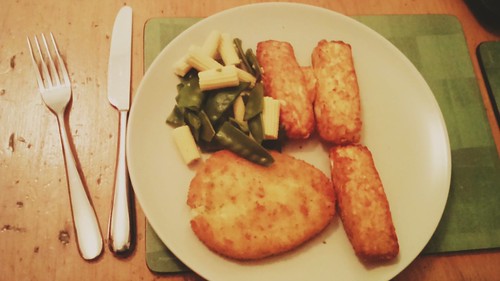