Posted on October 30, 2016 by thelostpenguin

I should say at the outset, that I totally underestimated how much dried goods I had in my cupboards. I have, for example, an awful lot of lentils. And lentils, as you’ll know if you’ve ever cooked with them outside of soup go a long way. It’s one of my favourite things about lentils, that a few ounces of dried lentils will transform into a big pot of dal that will feed me all week. Which is great, especially at the end of the month, when you need to make things stretch that wee bit further. When its not great is when you’re trying to cook up your cupboards and you cook a few things with lentils, they stretch far enough that you’re sick of the sight of the darn things and you still have lots of them left.

I’ll not talk about the two recipes I made from my recipe book – I’ll save them for their monthly post – though one of them was picked specifically as a cookup recipe. But other than that I did actually do quite a bit of cooking this month. There was lots of soup, curry, pies and Mexican food. I actually kept to my challenge quite strictly, and the purpose of cooking up stuff in the cupboards shaped the cooking that I did, forced me to be more adventurous and experimental to work with what I had. But frustratingly I don’t actually feel that there’s that much less in my cupboards than there was at the start of the month. I mean, realistically there is, for a start my Mexican food binge at the start of the month means that I no longer get attacked by that pack of tortilla wraps every-time I open the cupboard and I did empty out a decent number of half used packets and tubs – and most of the later were even in a good way into another recipes rather than into the food waste tub under the sink.

You would think that after the best part of two years of cooking only for myself on a day-to-day basis I would have accustomed myself to the idea that I don’t go through food as fast as I used to. But no, I still often forget that if I make a meal that the recipe says serves four, then that isn’t one meal for the family and one serving for me later in the week (or one meal for me and my mum and two servings for me later in the week if it involves chillies), its four servings for me. Which would be fine if I had a decent size freezer, but as it is I have an icebox at the top of my fridge – standard contents: pint of ice-cream, tray of ice-cubes, packet of pastry, pack of frozen quorn and some emergency veggie burgers – there’s not a lot of room for leftovers. I really need to internalise that knowledge when I’m standing in the supermarket contemplating the pulses.

Back when I was living at home with my parents, my own food cupboard was a small and tightly organised cupboard, and in order to keep things from getting forgotten about and expiring, I kept a list of my staples on the door, scoring things off as they got used up and adding them on as I bought replacements. I suspect I may need to reinstate that habit, because I this month I kept coming across things that I’d forgotten that I had – that while not yet expired were certainly getting perilously close to their dates – I do wonder what else is lurking about in there. Such is the joy of having more than one food cupboard – I now have to remember where everything is. I think I’ll be keeping up this challenge, it may not be particularly showy or dramatic but it is quite useful.

The Return of the October Cupboard Cookup!

Posted on October 2, 2016 by thelostpenguin

A second post? This early in the month? Must be challenge time!

For some reason, as the seasons turn from Summer into Autumn, my thoughts turn to my store-cupboards. Perhaps it’s a hibernating instinct to ensure that we have enough food in hand to keep us through the sparse winter months ahead, but there’s something about this time of year that makes my tendency to hoard cupboard staples particularly powerful. In an attempt to keep it in check, I’m setting myself a challenge this month. To cook up my cupboard staples ahead of the winter. There’s far too many packets – of pulses, rices and other dried carbs – and tins that have been lurking there since last winter, time to use them up and start afresh.

So that’s the challenge this month, to only buy perishables and to let my diet be shaped by the stuff I already have in the cupboard. Naturally, I’ll be blogging about. Recipe suggestions – especially for what to do with that packet of polenta – gratefully received.

(ETA Make that 2 packets of polenta. One loose, the other ‘ready made’ – why? Who can tell.)

Posted on October 1, 2016 by thelostpenguin

September saw a return to normal service on the challenge front, as I successfully cooked two recipes out my book. I’ve actually been a lot better organised on the cooking front in general in the last month. We’re moving back into the season of soups and stodge, and frankly that’s the kind of cooking I’m best at. Big pots of soup, dals, curries and pasta bakes. Pies, both savoury and sweet. Mmmmm bliss.

First up – because I love the breakfast and brunch recipes in this book that aren’t muffins – I made red pepper egg cups. The recipe also involves those giant beefsteak tomatoes but as the only tomatoes I had in the fridge were the cherry variety and I was only feeding me, I stuck to the peppers. I’d forgotten how fun stuffed peppers are. I’ve not made them for years, not since long before I became a vegetarian and I’ve got a hankering to make them now – perhaps with harissa couscous stuffing? The only criticism I have of this recipe is that it ought to specify small eggs. The peppers I had in the fridge were fairly sizeable and I still ended up with egg overflow everywhere. However once I finally got them back in the oven they were great. I sprinkled a little Parmesan on them for the last couple of minutes in the oven and that worked a treat. Though next time I suspect I’ll either add substantially more paprika or a little chilli powder to give it a little kick and I’ll definitely take them out when the yolks are still a little soft. Regardless, definitely one to add to the regular Sunday brunch rotation. 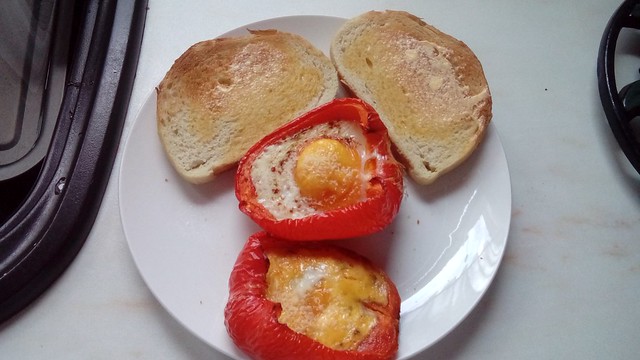 Secondly I made sweet potato gnocchi. I feel the name of this recipe is misleading as while you do in fact use sweet potatoes rather than the more standard variety of potato, there is rather more pumpkin involved. Handily I love pumpkin. I also love recipes that acknowledge that for 11 months of the year, you can only get pumpkin in a can on this side of the Atlantic. (I love pumpkin in a can – its too expensive to eat regularly but worth every penny in time not spent wrestling with an oversized squash. I hate peeling squashes with a passion.) Squash gnocchi – as I’ve decided to re-name it – is actually pretty straightforward to make. The hardest bit, as far as I’m concerned, is rolling it out into sausages. The first one worked perfectly, the others stuck to everything so next time I think I’ll add quite a bit more flour. Related to this, you’re supposed to chop them into little lumps, chill them and then drop them into the boiling water. As mine resolutely stuck together (and to the grease-proof paper) I ended up flouring my hands and lightly rolling them between my palms – like truffles – to ensure they stayed together. Which had the delightful effect of making them much more aesthetically pleasing and, for me at least, gave them a more traditionally gnocchi texture. Definitely one to make again – though next time, I’ll not be as heavy-handed with the garlic in the tomato sauce! 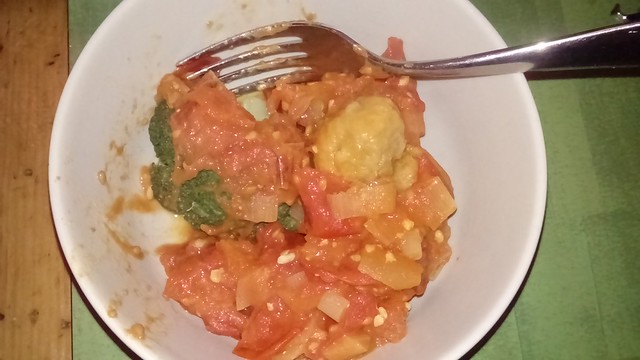