Posted on September 23, 2016 by thelostpenguin

I returned from visiting my parents with a big tub of stewed gooseberries, fresh from the garden. I debated making pie and then remembered that there was in fact a recipe for fruit crumble in my recipe book. Given that I love crumble and it would mean actually cooking something from the recipe it seemed a perfect confluence of events.

(On a side-note about gooseberries, my parents have been growing their own gooseberries for a substantial percentage of my life. However, in the garden of the house I grew up in, the gooseberries never got pink. The slightest hint of pink on the fruit and the birds stripped the bushes bare. So as soon as the slightest blush appeared on them we would strip our green gooseberries from the bushes and they’d be stewed or made into jam and that would be that. I rather like the tartness of green gooseberries. However, in their new house, the gooseberries get a chance to properly ripen. There, they get to ripen not just to pink but rather a rich almost purple colour. In that condition, they become almost sweet and – provided you enjoy tart fruit – you can eat them raw with some pleasure. They’re glorious, it was a revelation.)

So after much procrastinating and buoyed by the success of replacing the forest fruit filling with the gooseberries I attempted another substitution. This wasn’t entirely a good plan. The recipe uses ground almond in the crumble fix – as a flour substitute I think – but there I was with the gooseberries in the oven dish and everything else weighed out for making the topping. Only when I pulled the jar that I thought was ground almond out of the cupboard, it turned out to be Amchoor. Now, I’ve often used one of those things in place of the other in curry recipes. And the recipe called for dates for sweetness (seriously this book is obsessed with Medjool dates) so I figured I’d leave out the dates and the additional sweetness of the amchoor would balance out.

Readers, I’m here to tell you that it did not. Perhaps if I’d halved the amount of amchoor I put in as substitute, perhaps if the gooseberries had been green ones and correspondingly more tart, perhaps… In small portions it was…edible but eventually I gave up and scraped the topping off and ate the rest of my gooseberries with custard.

I should just have made a pie like I originally intended. 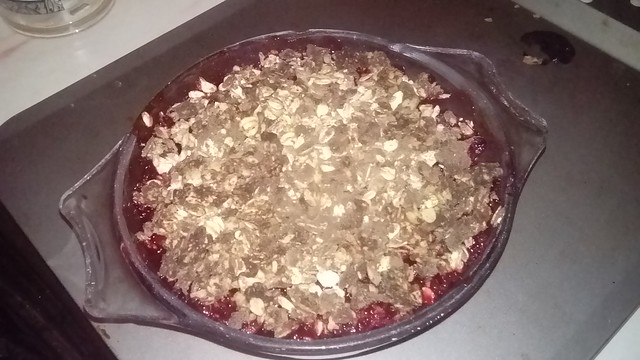