When I first went vegetarian full-time (a year and a bit ago) I did some unsuccessful experimentation with ‘meat-substitutes’. Recently I decided to try again in my quest to manage a varied diet with the need for quick and easy post-work cooking to balance out the more organised bulk cooks that I do. I’m pleased to be able to say that I have finally found a way to eat quorn that I enjoy. The answer apparently is curry.

One thing I miss about chicken is being able to stir fry some protein with some mushrooms, dump a jar of sauce over it, chuck it in a bowl and eat it with poppadoms/naan bread/prawn crackers as appropriate. But, I have discovered that frozen ‘chicken style’ quorn works as a perfect substitute. There’s something about the spices in curries that penetrate the quorn much more effectively than those used in Mexican food. So for example, even a jar of something mild like Korma will mask that distinctive quorn flavour! Success!

I expanded this out in two exciting directions last week. Having had success with the aforementioned jar of korma, I got a little bit more adventurous and picked up a jar of Keralan curry paste, a couple of handfuls of quorn, some mushrooms, spring-onions and half a can of coconut milk later – lots of delicious curry was served. I even managed to knock up a decent pilau with some massive raisins (left-over from the ones I steeped for my quinoa-that-wasn’t dish a few weeks back), some whole spices (carefully counted cardamom pods and a couple of sticks of Thai lemongrass) and some flaked almonds. Tasty, quick and easy and almost entirely made up from stuff I already had in my cupboards. I’ve never had Keralan curry before so that was an adventure but it’s delicious – pleasantly fennelly but not overwhelmingly so. 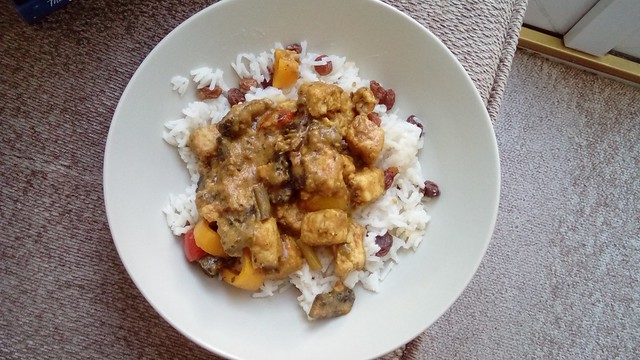 I do love daal best, but sometimes I want Indian food without spending 3 hours messing around with lentils and fried spices.

After the success of incorporating quorn into Indian food, I decided to venture into East Asian food. I made an old favourite of mine, sesame hot noodles. I doubt its remotely authentic but it is very tasty. The sauce is made by combining peanut butter, sesame oil, soy sauce, lime-juice, chilli and sesame seeds. It’s a quick and easy dish and I’d resurrected it because I needed to do a bulk cook and had zero motivation to do so. But while I was waiting for the noodles to cook, I noticed in my notes for the recipe (I have a little notebook of recipes I’ve gathered over the last 10 years) mentioned bulking it out with chicken and mushroom. I’d already stuck a few bits of baby corn, I’d found lurking in the salad box, in with my noodles. Feeling inspired I grabbed a handful of quorn, a couple of mushrooms that need using up (I nabbed them from the reduced section) and a couple of spring onions stir-fried them until everything was cook and threw them into the mix. Voila! Suddenly my super-lazy emergency dinner looked like a proper meal! 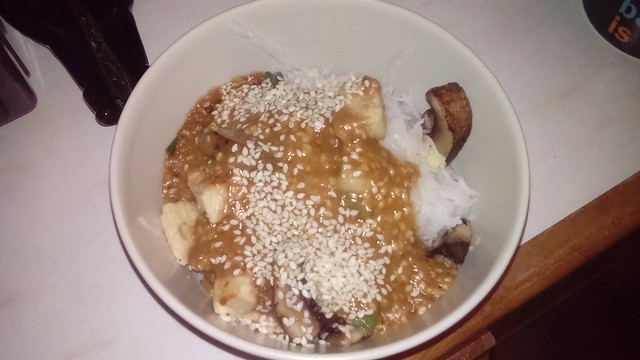 Although the weather definitely started to improve last month, it was still weather that called for some hot and filling bulk-cooking adventures.

First up we had beetroot risotto with feta cheese and mint. Beetroot is a vegetable that I’m trying to rehabilitate into my diet. It’s a vegetable that I associate with summer salads and quiet resentment. I was the opposite of a fussy eater as a child – I loved food and would happily eat pretty much whatever was put in front of me. Which is not to say that I necessarily liked the food in question, it just had to be really vile – looking at you over-cooked Brussels sprouts) for me to turn my nose up at it. Beetroot was always a bit of a minefield, for a start it’s a bit of a marmite substance in my extended family with opinions divided drastically. And then there’s the vinegar issue, as depending on if its been kept in vinegar or not it tastes completely different. Small un-fussy me would eat a couple of pieces for politeness – often baffled by why it tasted so much better/worse than the previous time I’d had it – and otherwise avoid it. It was always served cold. Once I was old enough to form true opinions on food it was consigned to the scrap heap of ‘food that Wendy will eat but would rather not’ along with cabbage, cauliflower, marmalade and chops.

Having successfully re-habilitated cauliflower into my diet over the last couple of years, I felt the need for a new challenge and beetroot seemed a suitable target. (I replaced cabbage with kale in my diet at 9 when my parents started growing their own and now that kale is widely available in the shops, I see no reason to go back.) I did make my own borsht a few years ago and it was…fine. I ate it, but I never bothered to make it again. But digging through my cookbook last month I came across a beetroot risotto recipe that look straightforward and gave it a bash. It came out a truly gorgeous red/pink colour. The recipe suggested using pretty much an entire packet of feta cheese, which seemed to me – having only recently been converted to the joys of feta cheese – to be a little excessive, so I went easy on the feta. But no, it needs the extra feta, which someone how balances the distinctive, slightly cloying beetroot taste. It’s a perfect match of flavours, delicious and filling to eat, really quite pretty to look at. A delightful discovery. 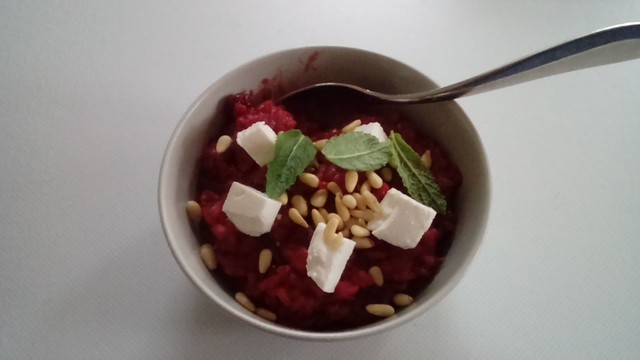 My second dish is a little bit of a cheat. As what I ended up making was more inspired by the recipe than actually following the recipe. It was supposed to be quinoa, raisins, walnuts and parsley, but I had some bulgur wheat left in the cupboard so I used that instead. The recipe said that you could swap pinenuts in for walnuts and as I had one and not the other in the cupboard I did that. And then my raisins were a bit dried up looking and needed a bit longer soaked in some fruit juice to revive them so I left them out. I definitely didn’t have any parsley but I did have some left-over cooked broccoli from a pasta dish I’d made earlier in the week so I added that in to bulk it up and add the required green element to the dish. It certainly wasn’t what I intended to make but it was rather tasty. 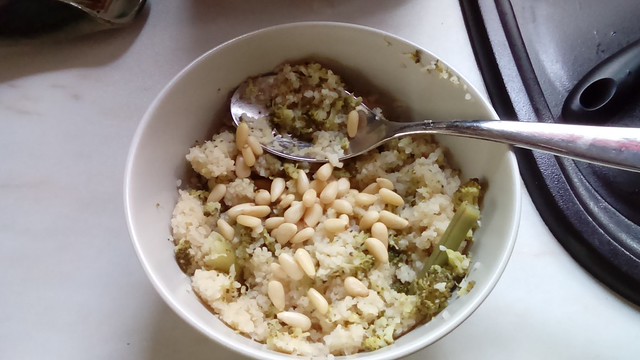