I’ve talked about the podcast Gastropod previously over on my other blog, as part of my efforts to write more about interesting sound projects. At the time I thought, really I should save it to talk about it over here but it fitted with the theme of the post I was writing too well. However, as I’d only recently started listening to the podcast regularly, I decided to download the previous six months worth of podcasts onto my mp3 player and was slowly working through the backlog. Then one day, the other week, as I synced my player, instead of my unplayed podcasts number going down it went up: by about 50 podcasts. Some glitch in my iTunes caused it to make all the podcasts I’d listened to on my mp3 player since the last sync appear as unlistened to and every single episode of Gastropod from the last two years (including episodes I’d already listened to and deleted) to download. How? Why? Once I’d cleared out the unnecessary duplication I found I now had 30 episodes of one podcast waiting for me. I decided to make a project of it. Listen to the entire back history of the series over the month of April and blog about it!

For clarity, I should explain, Gastropod is not a cooking podcast, it’s a podcast about the science and history of food – though I recommend listening to it with snacks because I’m regularly really hungry when I finish an episode.

(The first thing I noted, having gone right back to the start of the podcast, is how British Nicola Twilley’s accent is in that episode. I knew from listening to later episodes that she had grown up in the UK, but – to me – her accent’s very American so I presumed that either she’d emigrated while still a kid or that her parents were American and she’d moved back to the states. But she mentions in the very first episode her parents teasing her about her American accent – and using her fork US-style – and when she was interviewing an English contributor her own accent got much more English. Not that that’s particularly unusual but it was rather charming to see that play out as her accent was notably more American when she was interacting with her co-host.)

Having now listened to the entire backlog of the show – they just finished the current series – I can thoroughly and unreservedly recommend the show if you enjoy podcasts and reading/hearing interesting backstories about the food and drink that we consume. It is, however, not a podcast to listen to if you’re the kind of person who likes to be able to enjoy their food in an uncomplicated fashion. While both the presenters are omnivores, they never shy away from the dark side of some of the foods they explore, whether that’s the historical or current exploitation of workers or land that has lead to popularity of certain kinds of foods becoming popular and varieties replacing each other, the problematic relationship between food/agricultural science and industrial agriculture, or animal cruelty. A sizeable chunk of their episode on the history of beef in the US explored the connections between current livestock breeding programs and the eugenics movement in the US at the start of the last century. (About half the history units that I took at university were on US history, it never touched on this at all which is disturbing not just because of the subject matter.) Personally, I love that about the show. I’m quite happy to self-describe as a bit of a foodie, but the inherent classism shown by a lot of foodies and a lot of the food theories in general circulation is deeply uncomfortable to me. It’s preferable to me that people know where the food comes from and that they understand the costs and in some cases problematic issues around particular types of food. I like being informed about what I put in my mouth and this podcast is a brilliant source for that. I’ve learned all sorts of fascinating things about food and eating and the science and history behind both of these things. For example did you know that in Ancient Mesopotamia there was a Goddess who preferred act of devotion was to be given cheese? Or the Mafia got started in the citrus growing boom in Sicily that was caused by the English Navy buying lemons in bulk to fend off scurvy? Or, for that matter, that we have bitter receptors not just as part of our taste buds but also in our gut and respiratory systems, and that scientists suspect this may be why people who don’t like bitter tastes are more predisposed to sinus infections? (I’m one of those people; I was so excited to discover that it was an actual legitimate thing!)

I’m a little biased as they did a double bill on food and sound – going clubbing or to a gig and getting that bass thump in your chest is the closest we get to experiencing sound the way a plant does – and sound is my other great passion in life, but really the show is great, it makes me want to write blog posts on the topics they write about pretty much every third episode. Go listen!

Last month’s challenge recipes were completed in reasonably good time so its high time that I got to writing about them, rather than leaving it to the end of the month and risking running out of time!

Instant Karma smoothie was my next adventure into my cookbook challenge. It’s quite tempting to breeze through the smoothies in the book, trying them all but I’m conscious that they make perfect ‘ooops I didn’t cook anything out of the book this month’ recipes. While I’ve been quite organised with this challenge so far, I’m aware that I may not always be! Anyway, Instant Karma is a nice refreshing smoothie featuring kiwi and tart cherry juice. (Unsweetened cherry juice is really hard to find – and health food shops round here only do giant bottles or really tiny bottles, nothing in between.) It’s really very tasty, unfortunately my blender isn’t very good at kiwi fruit so I ended up with little lumps of kiwi core and the seeds remained entirely whole. Which would have been less of a problem if I hadn’t been loaded with the cold – hence making and drinking lots of smoothies in an attempt to force enough nutrients into my system to fight it off – and the seeds kept catching in my throat and making me cough! I made it again after I’d recovered from the cold and this wasn’t an issue, but I did stick a banana in it the second time to off set the tartness of the kiwis and cherry.

The other thing my blender is rubbish at blending are dates. Though as I’m not a big eater of dates this doesn’t normally matter. However, this recipe book is obsessed with dates – Medjool dates in particular – and using them as a natural sugar/sweetener so they’re in pretty much everything remotely sweet in the book. Dates being expensive and something of which I’m not a massive fan, I tend to avoid them and seek an alternative, which is a nuisance. It’s my main bugbear about this recipe book but as complaints go is pretty mild!

Next up I made the Stovetop lasagne. Except that it’s a bit of an impractical thing to make for one person so I actually decanted it into an oven dish and baked it so that I could keep it to eat over several days. Perhaps it’s the difference between cooking it longer on the stove rather than in the stove that does it, but I found that the carrots didn’t cook enough, so if I make it again, I might pre-cook the carrots. Otherwise it was a tasty enough lasagne, but honestly I prefer the butternut squash and sweet potato version in one of her other books. And while I like green lentils I think I’ll stick to using her veggie cottage pie recipe (higher ratio of lentils to veg, I think) as a lasagne filling.

So definitely tasty, but there are other versions of this recipe that I prefer! 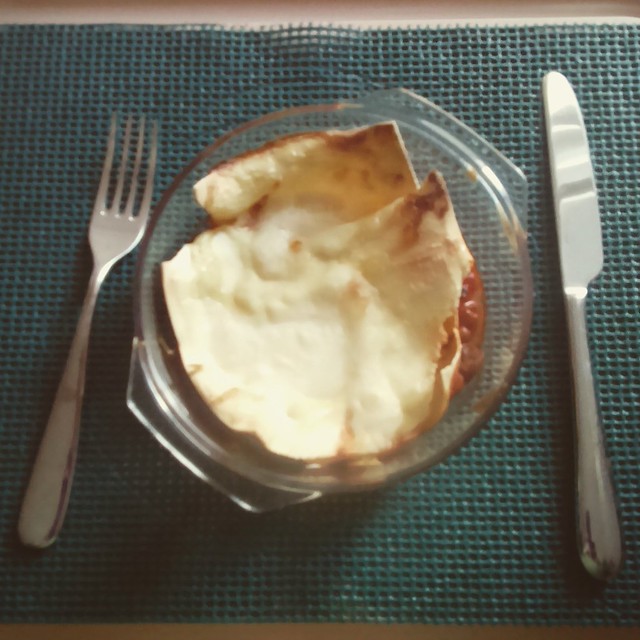 I ended up with too much sauce so I made a mini one too, as I forgot to photograph the big one have the mini one instead!