Given that I had made my two things for this challenge by the end of the first week of last month, you would think I’d have managed to write about them before now, wouldn’t you? Not so much.

First up was a smoothie. I love smoothies. I got a blender in my final year at uni and it was a revelation in terms of increasing my fruit intake and reducing my food waste. The summer I lived in Bournemouth was essentially three months of glorious weather and I developed a repertoire of lovely refreshing smoothies – to the extent that a couple of my friends bought me a smoothie recipe book for my birthday. I practically lived on them that summer and then, didn’t really ever make them again once I came home. As I once again have my blender to hand and Eating Well Made Easy has a whole section of smoothies I thought it was high time I got back into it.

I have to admit I’m a bit baffled by the whole ‘green smoothie/juice’ trend that seems to be going on in smoothies these days. That glorious summer in Bournemouth, I used to make a lovely fresh smoothie made with tomatoes and bell peppers, but let’s be honest, while we eat them as vegetables, they are – technically – fruit. I’m a bit baffled by this whole putting spinach and kale in your smoothies thing. (I have a friend who swears by it, but she has IBS and needs all the help she can get tricking her body into accepting nutrients – it makes sense for her.) I like both of those things, but for me kale is a winter veg – my parents grew it when I was a kid, I preferred it to cabbage – you put in soup. I can’t get my head around it.

I braved putting spinach in my smoothie and honestly if you’re putting in enough blackcurrants or what have you, you can’t taste it so I’ve accustomed myself to it. The first time I made it (It’s called Bright Eyed and Bushy Tailed cutely enough.) I put a small amount of pepper in it as instructed and that’s literally all that you taste. As noted above that’s actually a smoothie flavour I enjoy when the weather is hot, but when there’s as many other ingredients in the recipe as this has, it’s a bit disappointing that you can only taste one of them. On the second attempt I made it without the pepper and that was much fruitier and conventionally tasty. 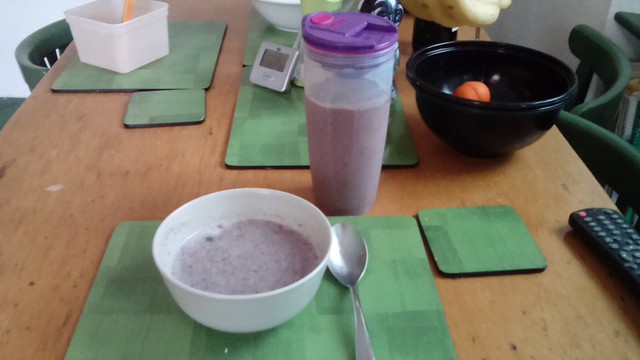 My second recipe was Saag Aloo Soup. It’s literally runny Saag Aloo, but that’s no bad thing. I think I prefer it as a curry than as a soup but its really quite tasty in either consistency. It doesn’t look particularly inspiring – hence the lack of photos – but its a tasty and filling for lunch on a winters day. I recommend serving with Nan Bread. You could probably make it with kale instead of spinach too, though you would need to cook it for longer, but as far as I’m concerned that would be a much better use for it.

Monday was Pi day. (It’s an import from the US 14th of March becoming 3.14 over there.) And is traditionally celebrated by the making and eating of a pie. Ideally one decorated in a geeky math related fashion. However you choose to celebrate it, it’s a good excuse to make a pie. I usually forget and kick myself over having missed it, but handily this year several people I know posted about it so I was reminded. Reminded in time to pick up some pastry on the way home and in time to figure out what on earth I would fill it with.

I’ve made pies before, but they’ve mostly been sweet pies. I have a set of four small pie tins and I make pear pies reasonably regularly because the pears that we get here have an unfortunate tendency to go from hard as bricks to made of squish with very little time in between. (Sometimes they will be both at once, that’s particularly annoying.) In which case the only thing to do with them is to poach them and pies are an excellent way to use up lots of poached pears at once! 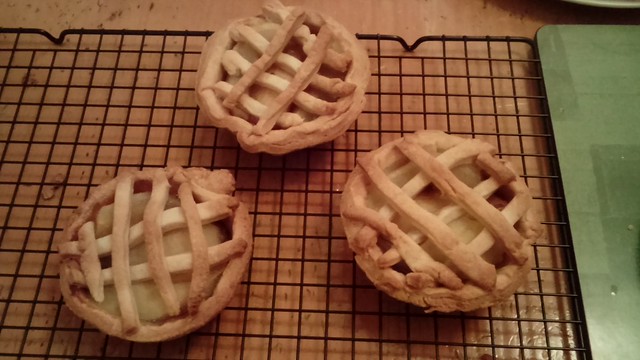 Savoury pies are a slightly more daunting task. Why you might ask? Because, having become a vegetarian as an adult, I have very little experience of non-meat-based pies. (Other than that terribly Scottish, utterly delicious but very unhealthy classic: the macaroni pie.) I decided to start with something I knew would work. My mum makes an excellent chicken and mushroom pie. She makes a white sauce, adds mushrooms – I suppose technically making it a mushroom sauce – and cooked chicken, making a lovely creamy pie filling. I knew I had mushrooms in the fridge so that made a good starting place. For some reason, while I make a good mushroom sauce and a good cheese sauce, my white sauce is always a little hit and misses. So I decided to go for a mushroom sauce. I dug around in the fridge and found some rather nice garlic and chive cheese, so I added that to my sauce – along with some actual garlic – and there was a bag of spinach that I reckoned would go nicely so I prepped that and let it wilt in my sauce.

The 500g pack of pastry left me with not quite enough pastry to make a solid lid for the pie. (It would probably have been fine if I used an actual pie tin, but as noted previously I have a set of four little pie tins and no normal sized pie tin. I do however, have a cake tin, so I used that instead and made what I’m calling a deep pan pie!) But as I’ve rather fallen in love with latticework pie tops – blame Pushing Daisies for that one – I made one of those instead. This adds an extra layer of excitement as when it’s cooking you can see the filling bubbling away through the ‘holes’. 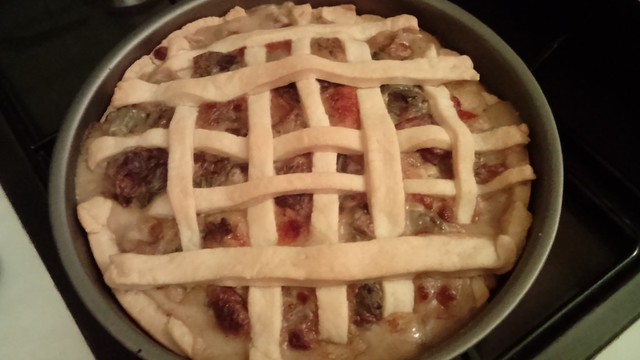 I’m massively, unreservedly happy with how my pie turned out. I made mashed potatoes with it and it was excellent. I’ve one slice left which I’m having for tea tonight – I’m doing tattie scones with it tonight for speed so we shall see if that work as well as I hope! All in all an excellent plan. 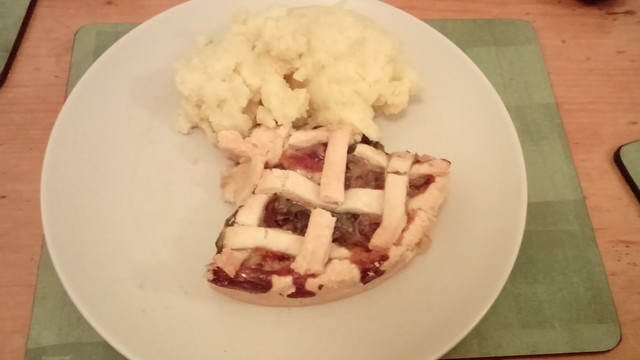