I came across a Billy Connelly quote the other day that seemed particularly apt, “Scotland only has two seasons: June and Winter.” And for a while there it looked like this year June had arrived without bringing Summer with it. (Seriously, it hailed last Friday.) So I’ve been making quite a lot of soup lately.

The first lot came about purely because I had some broccoli in the fridge that was looking a bit sad, so went looking for a recipe to use it up and came across a recipe for broccoli and blue cheese soup. There was a place in my hometown when I was a teenager that did an excellent cauliflower and Stilton soup, and given that I prefer broccoli to cauliflower any day of the week it seemed a good idea. So I grabbed some leeks and a pack of baking potatoes (you’re supposed to use large floury potatoes for it but the shops are rather low of potatoes that aren’t tiny at the moment so baking potatoes it was) and had at it. It turned out to be an excellent and very tasty idea and definitely one I’ll be making again and again in the future. The dollop of mascarpone is pure indulgence but does mellow the whole business out nicely. A delicious success.

It also came with instructions on making your own garlic bread, so I when I had time I ate tasty home-made garlic bread and when I was short of time I had left over fresh baguette to dunk in it. A win all round. 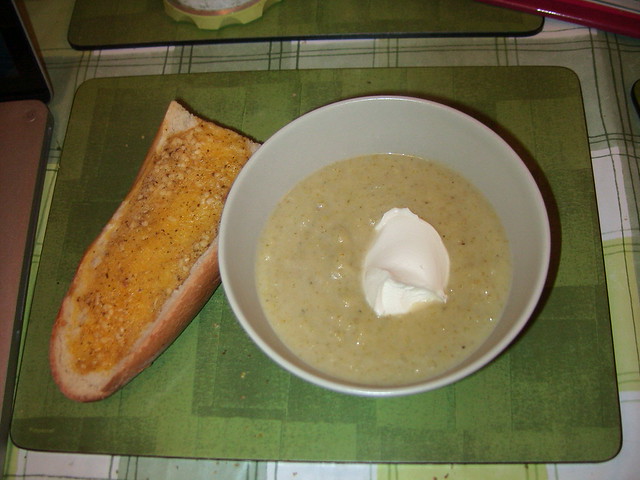 Having bought potatoes and leeks, the nature of these things is that there was plenty of both left over, so I obviously made potato and leek soup. But not ordinary potato and leek soup: potato and leek vichyssoise. Yeah. It’s supposed to be made with chicken stock but have crispy pancetta sprinkled on top as a garnish. As a compromise, as I still have random pork stock cubes in the cupboard, I decided to make it with pork stock instead. This was such rubbish soup, just really bland and bleurgh? I seasoned it to heck and still it was bland weird yellowy soup. So we shall not be making that one again. Rarely does Lorraine let me down, but when she does its pretty spectacular. 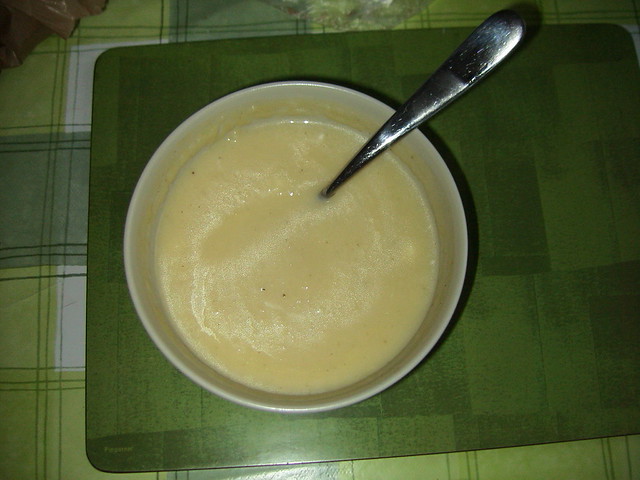