Back on the Wagon

So I’m back in Inverness and back to being a vegetarian. (So much easier to maintain when all your friends and colleges know you as a vegetarian and there isn’t meat in the fridge needing used up.) It’s been a month now and I’m really not missing the meat – outside of the occasional rubbish sandwich options – and I’ve been taking the time to experiment with different veggie options.

My last stint up here means I have a good selection of veggie staples to work with but I wouldn’t be me if I weren’t pushing my culinary barriers. I’ve always been a bit dubious about ‘meat substitutes’/’meat-free meat’ because, well they’ve always seemed a bit pointless to me. (Plus once you’ve tasted a good homemade veggie sausage the quorn variety really doesn’t cut it.) I have, however, tasted some good veggie burgers, whether mushroom or cheese and broccoli so I thought it might be time to branch out. I tried veggie Kiev’s. I like sweet potato, I like beans, I kind of miss Kiev’s. Nope. Perhaps if I find a good recipe to make myself I’ll give them another try, but based on the shop-bought variety it just doesn’t work. They taste of neither beans nor sweet potato, of the cheese and garlic filling there was no sign and honestly I just got an overwhelming mouthful of spice. So next up I tried some quorn ‘meat-free’ chicken. (For anyone, like me who doesn’t know what exactly quorn is – the label really doesn’t make it clear – it’s a microfungus, sort of like mushroom but more like yeast is my understanding.) While I have successfully moved to making veggie chilli, burritos, tacos and quesadillas, I haven’t yet made veggie fajitas that I’m entirely satisfied with. So quorn. I treated it like the chicken it claimed to be and marinated it in the spice mix and oil and cooked it all up with the veggies. It certainly has the texture of chicken, but it has its own taste that came through even under the Mexican spice. I’m not convinced. 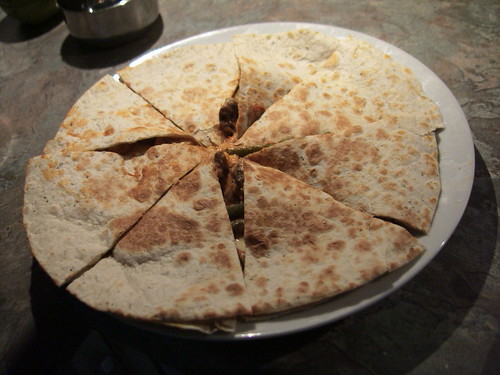 (Veggie quesadillas that I made as part of my cupboard cook up before I moved back up here, mushrooms, beans, spices, passata to bind and three different kinds of cheese. Bliss.)

Speaking of sweet potato, I’ve long been a bit wary of it due to only really eating it as an ingredient in sub-standard veggie burgers – grated up and tasteless – but after using it in the mash for the excellent Lentil and Bean cottage pie, I decided that I ought to give it another proper go. So I have a Lorraine recipe for Butternut Squash and Sweet Potato Lasagne and I love squash so that seemed a safe enough bet. One of my pet hates with veggie lasagne recipes is that they often use vegetables that don’t stand up to the cooking process, so you end up with mushy goo or lumps of uncooked veg. Or they throw out the pasta entirely and replace it with aubergine. Which is just, not lasagne anymore. Lasagne substitute for gluten intolerant people it may be, even a nice layered vegetable bake if you like aubergine, but not actual lasagne. This recipe side steps the issue of cooking the pasta and the veg at the same time, instead you pre-cook your squash and sweet potato first so they can then be mashed together (making a nice consistent texture), then part cook your lasagne sheets, add in an extra layer of spinach and only bake for long enough to finish off the pasta, cook the spinach enough that its tender but still intact and get everything else nice and hot. It falls apart a bit more than some meat varieties do – though I always bulked my mince out with beans or mushroom and broccoli – but not impractically so, as the veg mash holds together pretty well so gives it some stability. It tastes amazing too. I normally put mozzarella or smoked cheese on the top of my lasagne, and while I do think the Parmesan works well here I’ll probably use a mixture in the future. Though talking about the Lentil and Bean cottage pie, I might try adding passata to the filling of that recipe and see if that works as veggie lasagne filling… 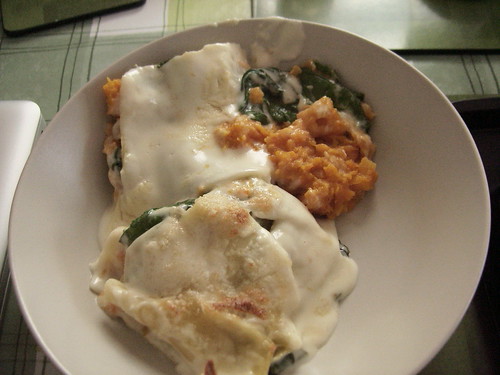 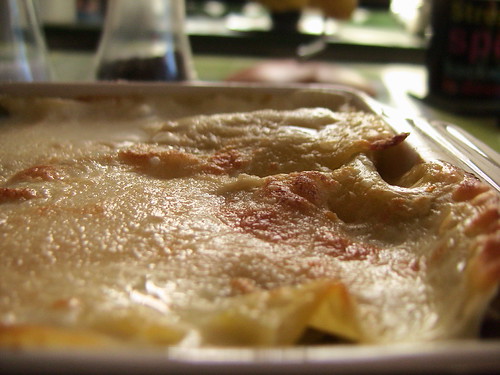