Posted on March 3, 2015 by thelostpenguin

The other week, I had a particularly productive weekend on the culinary front. As part of that productivity I knocked another recipe off my 30 recipes list, making Lazy Mini Sausage Rolls on Friday night. (With, I must confess, shop bought puff pastry, because as much as I want to learn to make short-crust pastry, having watched lots of different chefs make puff pastry I’ve come to the conclusion that it’s a faff and life is too short to make your own puff pastry.) Afterwards I went to update my recipe list and realised that I’d actually made a few other things off the list that I’d never written about here, and felt it was high time I rectified that. This winter I appear to have been making a serious attempt to rehabilitate the humble cauliflower. I have a bit of a mixed history with Cauliflower, as generally whenever I get it – unless my mum makes it – it’s either under-cooked and a bit ‘teugh’ or so overcooked it fall apart and tastes bitter and watery. Cauliflower cheese is usually safe from overcooking but can be disaster if someone decides to skimp on the sauce. Yet done right, its delicious – plus its really cheap at the moment, you get a lot of veg for your pennies – so with a couple of tasty sounding recipes in hand I set out to rediscover the joys of cauliflower. First up I went back to basics. Years ago, when I was first teaching myself to cook beyond the basics, my mum loaned me one of her OXO cook books which I cooked my way through during my masters with…varied success that was more to do with my inexperience than the quality of the recipes. Recently I’ve been working my way through her other OXO cookbook, which is essentially the comfort food of my childhood. Something that definitely wasn’t a staple of my childhood is the lentil and cauliflower largely because it calls for the inclusion of a couple of their ‘Indian Herb & Spice’ cubes. Which, as much missed and lamented as their Italian and Chinese cubes are in our household, the Indian ones were, well, a crime against the subtle nuances of good Indian cookery is harsh and not a little poncy sounding, but you get the idea. So without that particular sledgehammer to hand I had to make up the spicing as I went along. Not withstanding the need to refine the spice usage, curry is an excellent way to eat cauliflower; the slow simmer ensures it’s lovely and tender, while the flavours and spice ensure it is far from bland. Next up, I made cauliflower soup – I’ve tasted a decent number of tasty cauliflower and cheese soups over the years so I reckoned soup was a safe bet. At the start of last year I read an interesting piece by Nigel Slater – reading the food section of the Guardian on my lunch breaks at work has been a feature of many of my less exciting modes of employment over the years – on interesting new ingredients to consider adding into your repertoire. This particular soup was included in the article as an example of a different way to use Ras-el-Hanout – better known for its role in Moroccan cooking, particularly in tagines – and having been given a tagine for my birthday and purchased this not cheap spice mix it seemed a good confluence of elements. It turns out that boiling cauliflower in milk is an excellent plan, and depending when you add the Ras-el-Hanout depends whether you eat a rich and spicy soup or a smoother soup with a pleasant kick to it. The toasted flaked almonds to garnish are worth the effort, but croutons would work just as well if you had them in the cupboard instead. 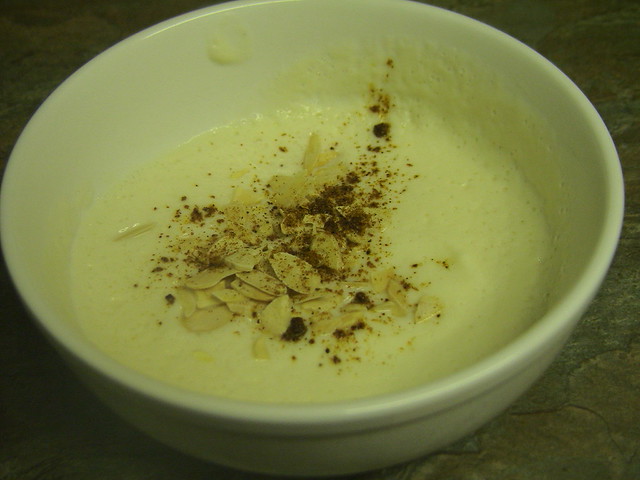 Not involving cauliflower, but no less tasty and warming, I also made Poached Pears in Sake. I have a long and affectionate – if idiosyncratic – relationship with Japanese food. (For example, one of my friends, with whom I have a longstanding monthly arrangement for Monday night sushi, regales her workmates with tales of going for sushi with the friend who introduced her to sushi and who doesn’t eat fish…) My attempts to cook my own have been mixed, but I came across a Wagamama cookbook in my local Oxfam bookshop and decided to take the leap. I keep planning to make things out of it and either chickening out or not having the time to make all the little bits. However, there was an unexpected glut of pears in January – why? Who can tell, but my dad and I came home from two separate supermarkets with large bags of pears like bricks for 20p – and that seemed a sign to poach some pears like nothing else. I confess to being a little excited to finally break open the mirin and star anise I had in the cupboard and use them in a tasty fashion. I’ve never made a chocolate sauce and it was rich and glorious with the pairs, though I should note that they work equally well served with cream if you enjoy the hot pear with cold accompaniment sensation. I personally prefer a hot accompaniment but I suppose if you wanted a less rich accompaniment custard would make a tasty, if less authentically Japanese version. 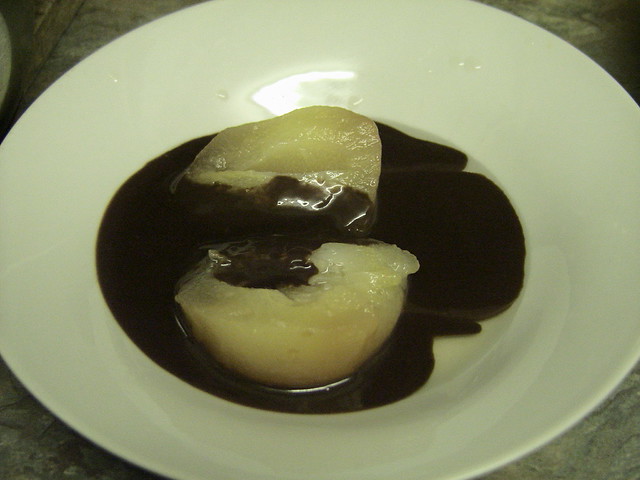